The alleycat to benefit Hugh & Tiga went down on Saturday. Good turnout and was hella fun! Plus the after party featured some amazing musicians. I didn't take any shots during the race (as I was riding) but got some good before and after pics... 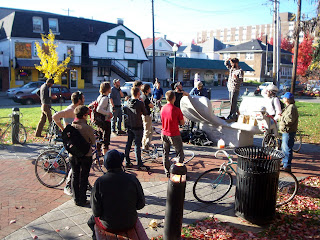 ^Field marshall Mike giving out safety instructions. More people showed up after this shot...I think about 15 raced, and about 15-20 people helped out at checkpoints. By the way, many thanks to all those people! Even Tiga, who (accidentally) made me puke. 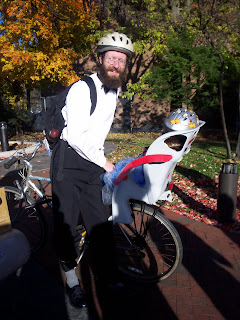 ^ My favorite competitors of the day! Not only did they dress up, but the little girl in the seat couldn't of been more than 5 or 6 years old!! I didn't catch their names, but he was really nice and she was a little shy (didn't want her picture taken- I can empathize). They probably hit the fewest checkpoints, but did so in style and as a team. 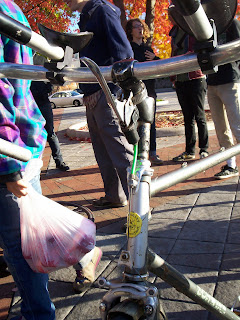 ^ Edwin's second bike of the race. He started on his new Eighth Inch polo bike but at some point switched over to his frankenstein singlespeed. Note the unnecessary aerobars, the community bike project 'headbadge', and suicidal brake lever!!! Love this bike! And that bag to the left is full of apples from the apple-bobbing stop, which continued their life as post-race nourishment. 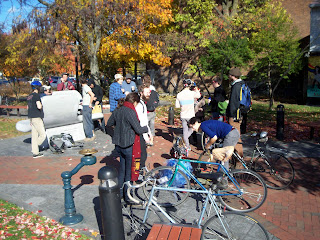 ^ More peeps gathering in people's park, the starting/ending point. A great centralized location for the race, and it was nice to see the park not filled with drug dealing hippies for once (though I think a few followed everyone to the afterparty). 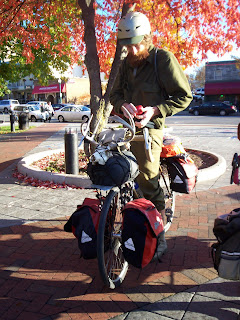 ^A couple of long-haul tourers showed up at the end of the race. Apparently two nights before they slept in a rock quarry in southern Indiana near Louisville! They're from Tucson, Arizona and have been on the road quite a long time. Note the eight point deer rack on his handlebar bag!!! I cannot recall the couple's names, but they were very nice and I wish them godspeed on their continued journeys. 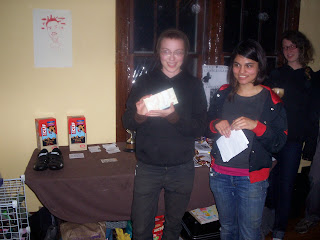 ^Post race results at the Fort (15th & Woodburn) with organizers Taylor (left) and Ashley (right). In related news Ashley will be joining us for the Midwestern Champeenships in Columbia, Missouri in a couple weeks. These gals did a great job organizing this race! Many props to them! 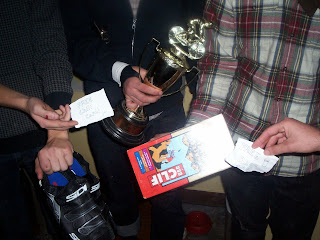 ^ Shot of a few of the prizes. The trophy was found in a dumpster by Gregg- 1991 Little 500 11th place! I really do love our cycling culture here in Bloomington, Indiana. We recycle everything, even trophies! A sweet pair of road shoes (for clips) was up for grabs, in addition to free beer (those white pieces of paper), free chili, and giant boxes of clif bars. This photo only shows a few prizes, many others didn't make it into the photo and/or were IOU's for custom gear. This cute girl named 'Jimmy' is apparently going to make Gregg a custom top tube pad and me a cycling cap! I cannot tell you how surprised and excited I was about these prizes.

Results as I recall: (1) Zachary, (2) Gregg, (3) Dan [who was sporting the coolest racing jersey/sweater I've ever seen], (4 tie) Edwin & Lembo, (6) some cool bearded dude from out of town who rode a mountain bike, (7) high school mike.... then my memory gets fuzzy.... must've been all that delicious Upland Wheat Ale! Thanks again, Scofield. 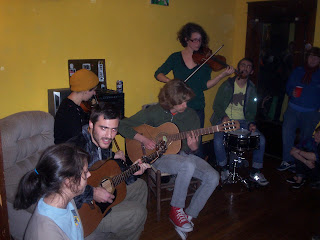 Holy shit if you have not heard Selfish Whales then do so right now. Two violins, no microphones, beautiful group vocals.... I love this band. Even featured my racemate Dan on the (slightly minimalized) drums! I had heard their name before, but now my ears are on board too! 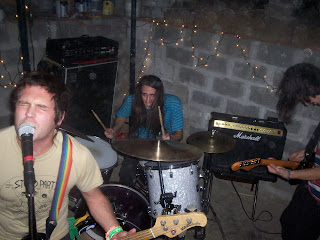 Next up was Pink Houses. Again a band I had heard of but never heard. Tight, thrashy punk that, despite the name, has nothing to do with our own Johnny Coug'. Humble, friendly guys. I will definitely see this band again, probably many times. 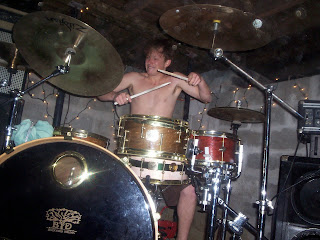 ^The last band I had no idea was playing, even though I'm basically related to 2/3 the band. Humans is a fucking awesome dirty punk band. They have a cassette coming out soon (that I actually have a coy of!) that kicks some royal ass.... ok, I know my ranting has gone from bicycles to music, but it's Bloomington, so it's all the same! A few more pics then I'll shut up. 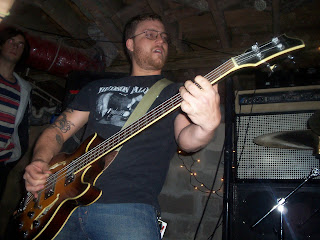 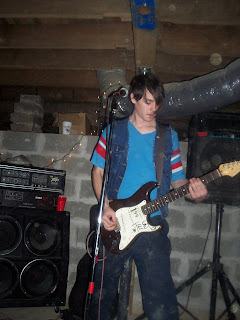 
So yeah, this post contains no real polo news, but that doesn't mean there's nothing to report! Goods things are happening for Bloomington Hardcourt, but I'll wait until I have accompanying photos to spill the news....

High fives to everyone who came out to the alleycat! Rumor has it there is already a Holiday/Christmas alleycat in the works.... ;)