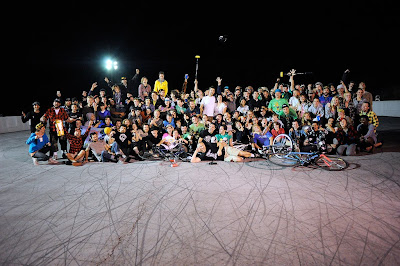 [Everyone from midwestern's before the final match. Click for large.]

First and foremost-- there will be intercity "friendlies" between the St.Louis and COMO crews on DECEMBER 5th, and Edwin, me, and that spectre named Rinzin will be making the trek over for some quality polo with quality peoples. Hopefully a few more Bloomingtonians (that sounds akward) will ride over with us- anyone is welcome to come! Should be good practice before the JANUARY 19th Lock-In in St.Louis. I also hear there might be some polo happening up in Indianapolis again. Hopefully I can find out more about that soon.

Here's something kinda cool. Doug from NYC posted that video I shot of the midwestern final here on his polo blog. If you're not familiar with HardcourtBikePolo.com then you should bookmark that shit right now. His blog is basically north america's primary polo news source, and I believe he's even the one who coined the term "hardcourt" bike polo (to distinguish our sport from its grass polo forefather). Great site that I check daily and to see that video on there was pretty sweet! Check it out if you haven't yet.

And of course don't forget the forums at bikepolo.ca, which is an equally important website. While you're at it sign up on the Bloomington club page here.


Now on to local stuff. As always lots of new people are showing up and great fun is being had by all. We're also been up-ing the ante as far as equipment goes... 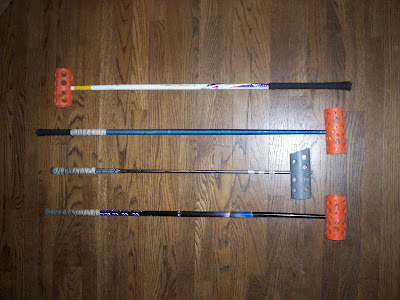 ^Shot of my newer mallets. The two golf/conduit ones I broke at midwestern's really opened my eyes to the durability required for "real" polo. Thankfully the ski poles and mallets we brough back from como have worked out beautifully! Again, thank you lucky and nick! 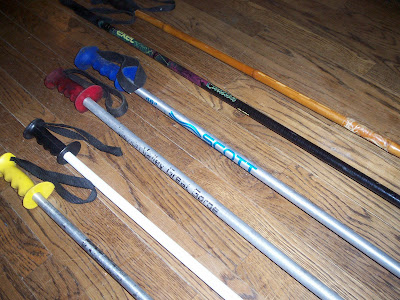 6Rinzin has been collecting random ski poles and we finally got the chance to turn them into some mallets. The hdpe we got from the COMO boys has been working out splendidly! We're actually almost out of it, so if you want a piece to make your own mallet just hit me up at pickup- I usually bring an extra one or two for people who want 'em. 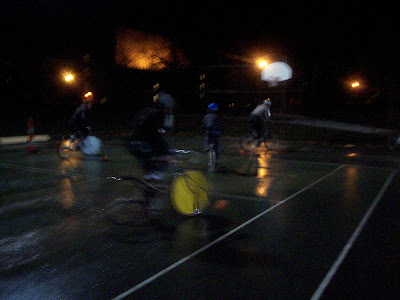 ^Two new things have been implemented at pickup- boards and helmets. The boards, though rudimentary, have kept the ball inside the court and allowed games to go on continuously! Very nice. I already have some ideas for much better boards and even a free standing court. Helmets... why the hell have I not been wearing one the whole time? Everyone takes the occasional spill (me more than others) and it's just a safe thing to do. My $20 kid's bmx helmet works fine and I don't even notice I'm wearing it. Best part is everyone's been dusting their helmets off and now at least half the players on the court at any given time are wearing 'em. And 5 out of 6 mallets are now ski poles! Nice. 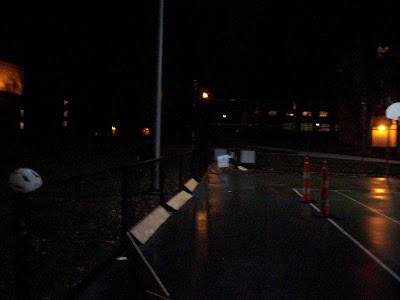 ^Courts have been wet though. The boards are meager but functional; though my friend Ryan plowed into and broke one of these immediately after it the photo was taken. It was kinda funny though, so it's all good.

And if you look closely you can see a ghost in the background. Seriously.


That's about it. See you at pickup!

And just for fun, I'm gonna post this photo of a sweet beater bike that I saw online. All I could think was "that'd make a great polo bike!" 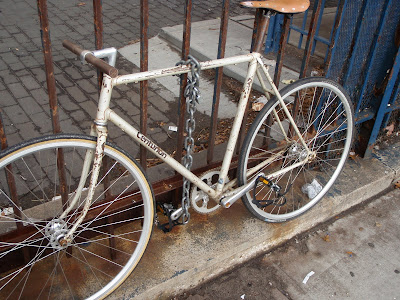 Posted by Polo-Velo-Bloomington at Saturday, November 21, 2009