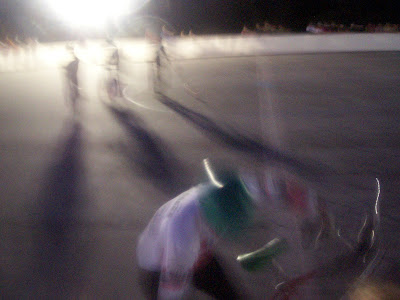 It's Wednesday but I'm still recovering from this past weekend. After warming up at Thursday night pickup it was off to Columbia, Missouri on Friday for the Midwestern Champeenships. Three days straight of the most intense polo I've ever seen or played. Ashley, Evan, and I represented Bloomington well (i think). We made lots of new friends, learned many new skills (wheelie shot!), and even brought back a plethora of mallet making materials (thanks Nick and Lucky!).

I don't know how much I'll write as there is just too much polo-related awesomeness to convey over the interwebs; so I'll just post some of the random, shitty photos I took and you'll get the idea.

First though, here's the video I took of the final match between Chicago and Milwaukee. The camerawork and video quality sucks, but you can get a good idea of tournament level play from these two quality teams.

/// /// ///
And now for some crappy photos that don't even begin to convey the magnitude of the event. 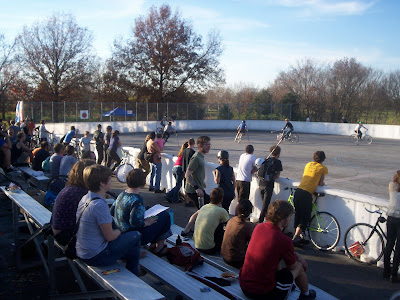 ^Overview of the stands at midcourt. Everyone spent most of the weekend propped up against the side of the hockey rink (street hockey court, hardcourt polo field, or whatever the hell you want to call it). 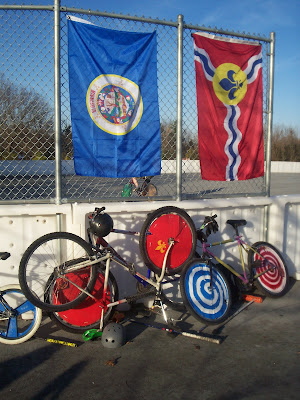 ^Bikes of the St.Louis team King Shin Way featuring two brothers (Lee and ?) and another guy named Jake. We played them in our first match and holy shit were they good. While waiting for our match to start we told them this was our first match and Lee was like "oh cool, well maybe we shouldn't get physical just yet". Sure, they beat us soundly 5-0, but we got some good stops and Evan and I only wrecked a few times. But later... dear god these St. Louis boys may as well been playing hockey. Full body checks, ceaseless mallet hacking, leaning in with the shoulders and elbows at every moment. The Como Arigato vs. King Shin Way match was to most brutal and exciting of the entire tournament. Too bad my video camera died two minutes in... 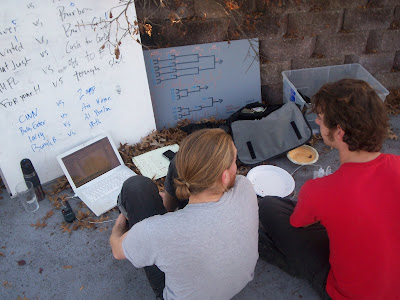 ^Vince (left) gave up playing in the tournament to organize and run it. Same with Drew, who you can see at the beginning of the final match video. Chris (right) also was instrumental in making the Midwesterns happen. He hooked us up with his teammate Nick, who's house we stayed at. Add a tall lanky kid named Charlie to Nick and Christ and you've got the Columbia A-squad. Hell of a team to watch play. 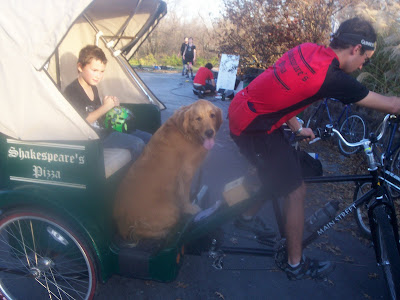 ^Curtis (far right) was Nick's roomate and local Pedicab driver. Nicest guy ever. Lucky is the dog who hung out in the shade all weekend. Local kid getting a free lift. 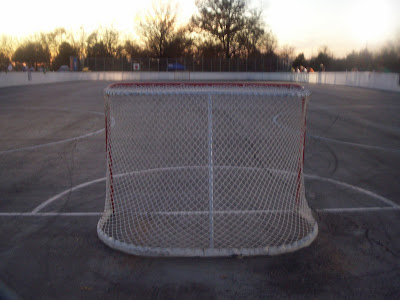 ^Down court from behind the goals. Love the hockey nets. They wouldn't work on our small courts, but on the big ones they'd be nice. There was never a debate as to whether the ball went in or not. 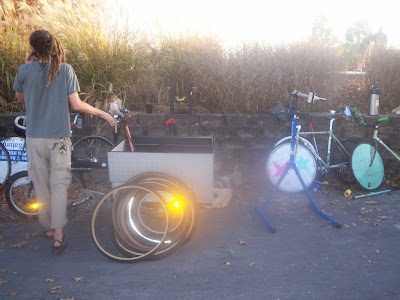 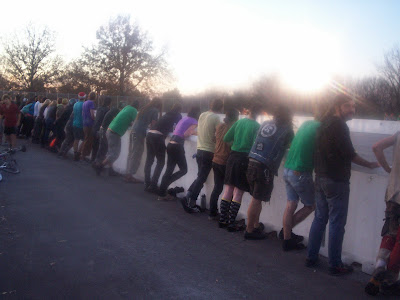 ^Crowd along the wall. 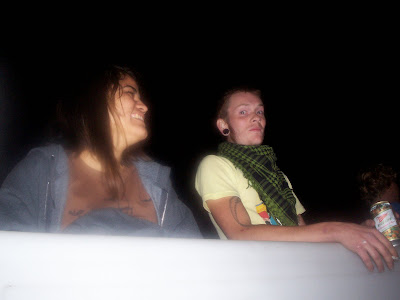 ^Teammates. Did I mention we could drink right on location? 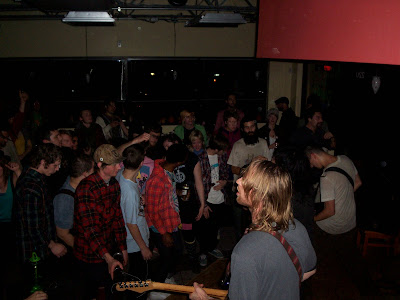 ^After party. Joy Division cover band called Joy Revision. Fun times. There was an after-after party too at an abandoned warehouse called the Hair Hole. Or was it Hare Hole? I have no idea cause I passed the fuck out. 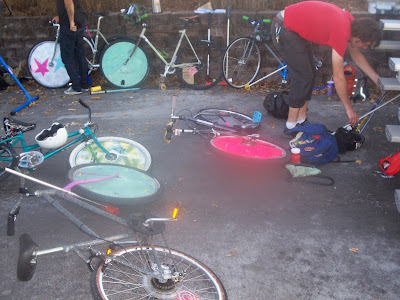 ^Bikes, bikes bikes.... saw so many great polo-specific bicycles this weekend. Here are a few of my favorite..... 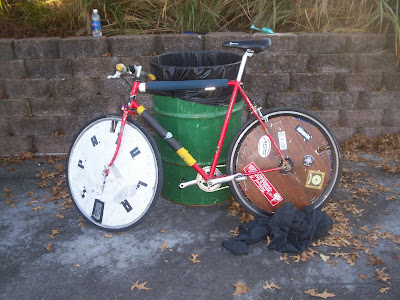 ^
I'm pretty sure this one belongs to Chris from COMO. That kid had amazing skills. On more than one occasion he abandoned his mallet on the ground and played with just his bike-- blocked multiple goals and one time took out all three players from the other team! And his wood laminate disc cover is totally my style. Might have to steal that idea.... 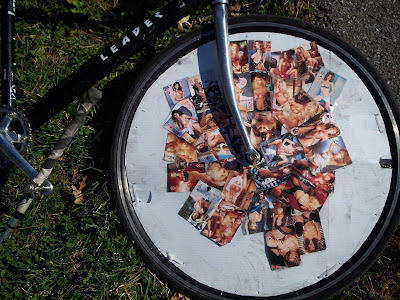 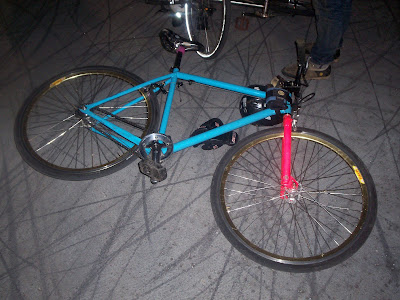 ^ Favorite bike I saw. Quality frame and parts but with the "primary colors" of gold, pink and sky blue. Belongs to one of the best players I saw, Kremin from Milwaukee. 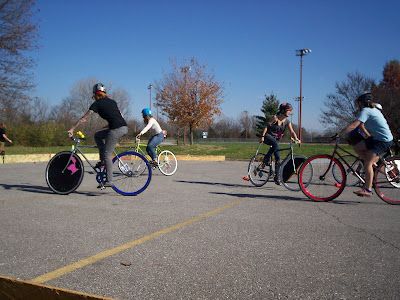 ^All girl pickup game on one of the side courts. Bunch of gals from Austin, TX showed up, along with a decent female crew from Colorado Springs and Denver, CO. 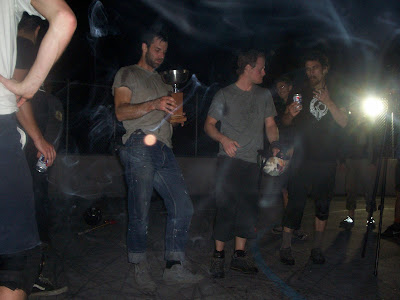 ^1st Place - Machine Politics (Chicago) On the far right is "Lefty Joe", the tournament MVP. First place got some sweet Brooks saddles. Notice the smoke in front of the camera? That's one of the "victory cigarettes" that were lit promptly after the match finished. 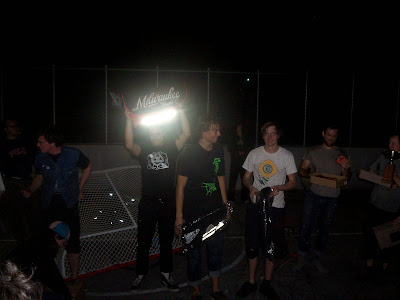 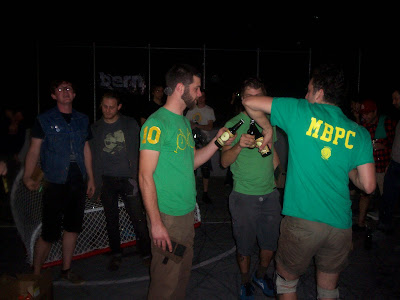 ^3rd Place - Hot Sauce Enema (Milwaukee) MKE's other squad with the beer homebrewed specifically for this event by COMO Megan. There was a third team from Milwaukee that was super nice and we hung out with a bit. Apparently the trifecta of Chicago, Madison (WI), and Milwaukee seems to yield the highest level of competition and therefore some of the best players in the Midwest. We've gotten the invite to come up and play at any time. Like I said, nice peoples. 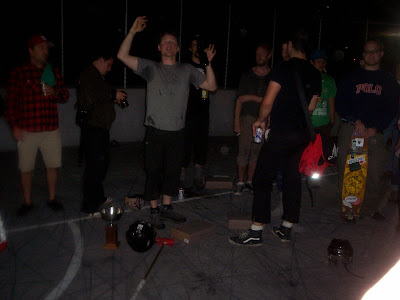 ^Here's Chicago Ben attempting to "herd cats". After the results were announced and the trophy handed out he took a moment to try and do some group organization. Mob rule decided that the next of the biennial midwesterns will be held in Minneapolis, MN this spring, while the autumn installment will happen in Lexington, KY. Both places sound great to me as I have lots of friends up in Minnesota and Kentucky is super close. Also a formal organization called North American Hardcourt is in the works. 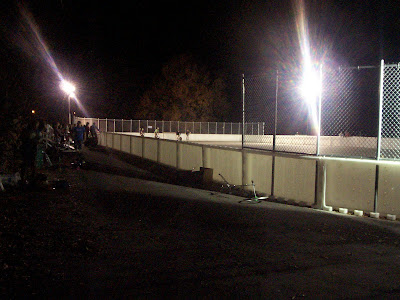 6 hours later we were back in Bloomington. I caught a few hours of sleep before waking up and building a slew of boards and mallets for our tennis courts. We used all the new gear that night and it made a world of difference! (aside from the mallet I took to the face, ouch) After the quality of courts and play I experienced at COMO I want to bring that same quality here to our regular games. But more on that later.

I have more film from the tournament, but I'll have to try and edit that into something that's not so incomprehensible. Evan took a million pictures too, so more on this amazing tournament weekend to come.