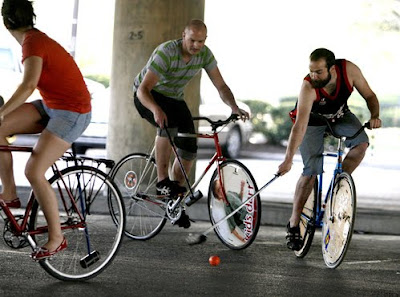 "Every Thursday night, on the parking lot between Delaware and Alabama streets under the I-65 underpass, a group of cyclists convenes, armed with homemade mallets. Six of them throw their mallets onto the ground, and split them into two groups. These are the teams. Then, each team retreats to its goal as a ball awaits at center court.

That’s how every game begins for the members of the Indianapolis Hardcourt Bike Polo club. Launched in early 2009, the club has gradually grown in popularity — a recent game attracted more than 30 participants and spectators. All games are co-ed, and anyone can come and play, borrowing bikes and mallets if they don’t have their own.

“You can play as hard or loose as you want,” organizer Keith Cruz said. “The biggest thing is just being able to stay on your bike. It demands a lot more agility and balance than normal bicycle riding. Beginners crash a lot.”

Cruz and company are networking with nascent clubs in other Hoosier towns. Tournaments will be held in Bloomington, Muncie and Fort Wayne this summer. Area residents are welcome to join the club any Thursday night. “We just recommend you bring a helmet.”"
source

I love to see the local boys gettin some good press!

Also of note, this whole "heroes on two wheels" series gave a shout out the Indy Cog crew. While I don't live in Indianpolis, it's easy to see how much they're doing for the local community. In the past year they've brought more press and attention to cycling issues than any television or radio channel in the area (that I've noticed). Glad to see them gettin some props for their good work. 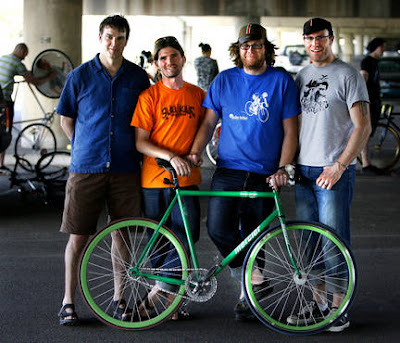