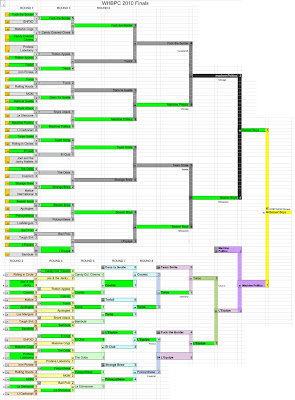 Midwest represent! The google document at http://tinyurl.com/whbpc2010-finals was a brilliant idea! It allowed live updating, but only after the games were finished. Not nearly as nice as it would've been to actually watch it, but it was thrilling nonetheless when results would appear. During the final match the twitter page BikePoloBerlin was updating goals so fast i wandered what the hell was going on, and apparently that was Brian Dillman scoring a quick five goals! All five by himself! That's gotta be a polo hat trick or something- and in the final match of the world championships no less. Damn i hope there's video of this.. anyway..

Sounds like Berlin did a fantastic job. Worlds 2011 - Milwaukee??