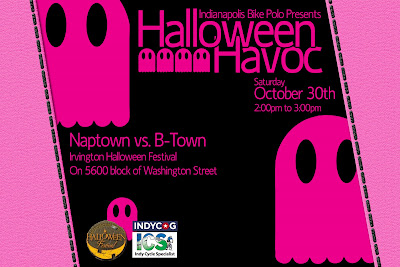 This is an idea that Keith and I had been throwing around for a while, and the Irvington Halloween Festival is giving us the opportunity to make it happen. It'll be a city versus city bench minor-style match. If you're not familiar with Bench Minor it's a format laid out by the NYC polo crew that is more akin to hockey than "normal" polo. That means no goal limit, reffing, a penalty box, longer games (probably 30 minutes), and bigger teams that switch on the fly. Read the original ruleset written by ZachNYC and posted at Doug D's blog. With a few minor exceptions (teams of 6-8 instead of 8-10, costumes instead of uniforms) this is what we'll be following. Bloomington has been playing what we call "east coast rules" for sometime now (20 minutes, no goal limit, switching on the fly) but this time it'll be for real! Indiana bragging rights are at stake, so we gotta show up strong. Keith and I will be captaining our respective cities and need to fill the roster over the next couple weeks, so Bloomington cats speak up if you're interested in being a part of this.

More ranting and info to come...