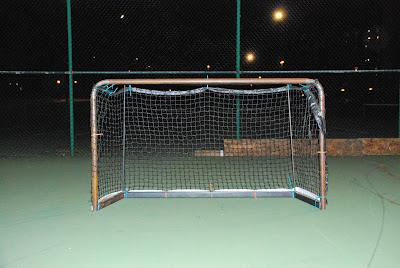 Heavy as sin! Made right here in Bloomington by Josh from Clutch Fabrication. He really did a great job on these. They're very "rear-heavy" so it's nearly impossible to knock them over from any side. I love that he wanted to use square steel on the bottom to increase friction/resistance with the ground, but then large gauge tubing for posts and cross bar to make sure the ball reflects right. 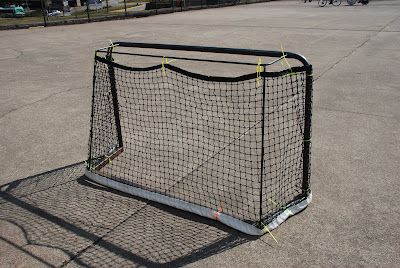 Still a long ways to go til there competition ready though. First off we're gonna paint them bright red! Then we're stringing up a better net, not using zip ties to keep it on, and rapping the bottom in old tubes to create even more resistance with the ground. Lastly, i'm gonna make some homemade "deadeners" to keep the ball from bouncing out; even though I love the sound the ball makes when it slaps the steel after a goal. Very satisfying. As is the swish of the net. 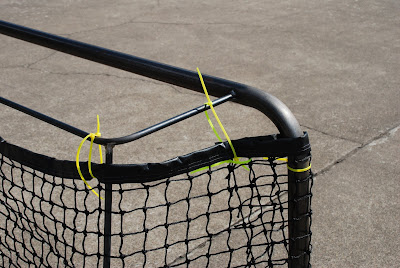 And, yes, they're taller than 3'- we went with 3 1/2' (42 inches or ~106cm). While they're still the standard 6' (182cm) in width, we opted to raise the crossbar up six inches to allow more shots into the upper area. Sure it doesn't happen that often, but when it does it's fucking awesome!! More and more players a learning how to shoot for the 3 and 4 holes and in my opinion it's exciting and makes for a better match. I'm sure someone will make the "it's easier to lean on the goal" argument, but if you're leaning on the goal to stay up then your lack of skill is a bigger problem than the relative size of our goals. Ironically most of the people who make that argument (*cough*europeans*cough*) use goals WITHOUT A CROSSBAR that tend to sag like your old aunt's titties... so i'm sorry but they're our goals and we're gonna build them our way. There's very few sanctioned events anyway, so if our set is relegated to "non-conforming status" then that's fine by me.

Look for these to make their first tournament appearance at Riverside II in Lafayette in a couple weeks. Thanks again Josh!!