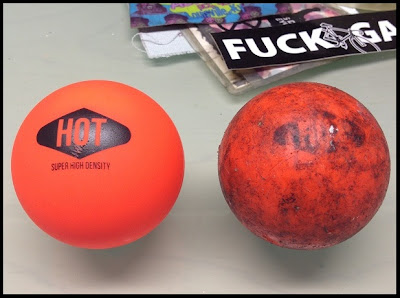 My good friend from Louisville was lucky enough to snag some of the new NAH/Fixcraft balls before the rest of the poloverse. I wanted his opinion and he more than delivered in the form of a review- so i'm posting what happens to be the first ever guest article on this site. Thanks again dude! Sounds like these "hot balls" are a winner.

- - - - - - - - - - - -
The new NAH balls are fucking sweet. Thanks to a happy accident where Fixcraft shipped 3 of them to me instead of the 3 Medium Temp Franklins I ordered I ended up with some samples about a month ahead of schedule.


First thing we decided to check was how well their claims stood up against a Red Franklin. They claim it's easier to spot, stays hard longer and is a ball better suited for polo. For the first time, we aren't borrowing technology from another sport but instead providing for our own exactly what we need. I'd definitely say they succeeded.

We played several games in the garage yesterday with 3 different types of balls - The Fixcraft Hot Ball, a Red Franklin and a D-Gel. The whole Louisville club also spent some time just riding around and trying them all out. Overall the consensus was that the Hot Ball was the best of the 3, with the D-Gel and the Red being left more to personal preference so there was no clear second. This is typically what our observations were:

Fixcraft Hot Ball
PROS:
- Weight: You definitely get a satisfying smack out of hitting the damn thing. Despite supposedly being almost identical to a Red, there were noticeable differences in how the two handled and felt to the point where a weight difference is felt - the Hot Ball is a little heavier.

- Visibility: Even after an entire afternoon of being knocked around the dirty, grimy garage, the Hot Ball still retained a lot of its glow. Definitely easy to spot across the court and in lower light situations.

- Durability: With the rise of capped mallets, shots have taken a strong upswing on power and velocity, resulting in some pretty intense forces on the ball being used and often a broken Mylec or two. Even with some pretty vicious shots straight into a brick wall, the ball had only minor chips and scratches, nothing to indicate it would be splitting in two any time soon.

- Bounce: By determining through the most scientific means possible - dropping them both from about chest level at the same time - the Red and the Hot Ball seem to have just as much rebound off of concrete, but the Hot Ball seems to die down a little quicker off the wall than the Red. May just be because of our brick walls, I'm interested in seeing how they perform this year off of the plywood boards most courts sport, as well as the Plexi boards in Lafayette.

- Viagra Factor: Even though the hot ball should be played at the same above-72 temps as a Red, we didn't notice any sluggishness out of it while playing in the covered garage on a day where the temp was about 65 outside (a little cooler in the garage.) In fact, one of the most noticeable differences between the two was how often we duffed passes or accidentally rolled over a ball because it caved a little with the Red but how responsive and solid the Hot Ball was all day. I'm sure they'll work great this summer with the sun constantly heating them up.

CONS:
- About the only thing we had complaints about was something none of us could explain. For some reason, the Hot Ball likes to leave the ground a lot more willingly than any other ball I've ever played with. Upper decker goals should be on the rise this season, and if you aren't using a facemask during tournaments now, you will after you catch a couple of these to the face this summer. There were several near misses yesterday with shots flying past peoples faces or flying high enough to ricochet off handlebars - enough that it wasn't just coincidence or one person making it happen. 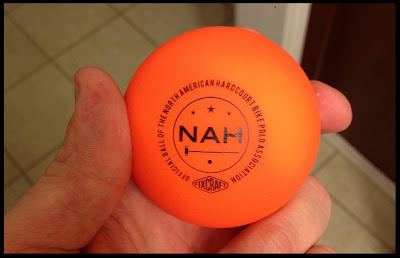 Posted by Polo-Velo-Bloomington at Tuesday, March 13, 2012