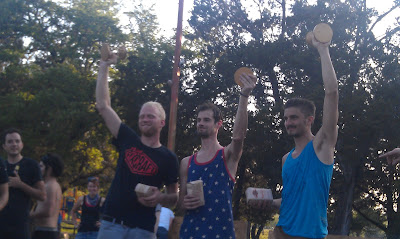 [Photo courtesy of Aaron Hand]
Holy shit Charlie, Nick, and Ben won South Centrals!!!! Up north here we were following on Podium all weekend long, with the occasional updates from our Missouri brethren. SO FUCKING PUMPED these guys won! They really deserve it. Lots of top tier finishes but 1st place had eluded them. Remember when they called him "Rookie Nick"?? That went away when he won MVP at ESPI's, but now he needs a new nickname!

Congrats guys i'm so happy for ya! We'll celebrate with some good whiskey this weekend when y'all are in Bloomington!