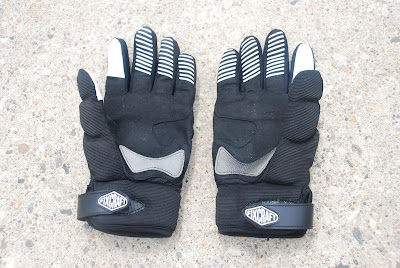 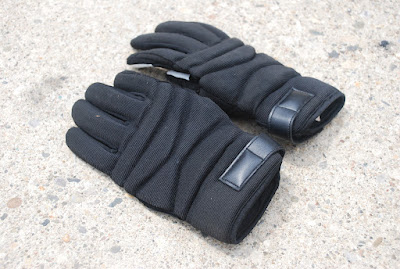 I've used Franklin's "SX Comp 150" gloves for most of my "polo career". They're cheap, they have good padding, and the material in the palm is thick enough to last. That said they're really only good for a single season, and by the end of that season they're gonna start gettin' pretty janky. That's the exact problem i ran into at North Americans in Milwaukee last month. It was so god damn hot that the palm was stretching and the extra material would get caught on my mallet when i would rotate it in my hand (especially on those subtle motions needed to finish a shot or ball-handle around someone). Desperately looking for someone's gloves to borrow i ended up trying on Malakai's prototype Fixcraft gloves...

They work. They work really well. I've used many different types of hockey and lacrosse style gloves, and while those styles offer an abundance of protection they don't have nearly the dexterity that the Fixcraft gloves do. They also tend to wear the palm out really quickly, rendering $100+ gloves useless pretty quickly. Lots of guys have also worn the Mechanix work gloves that provide good dexterity, but terrible protection and at a high cost. The Fixcraft gloves are the perfect middle ground.

What would i change about them? Well for one the pair i have are size Large, while i should ideally be using a medium. Segmenting the finger protection would also be useful and provide a lil' more dexterity in the fingers, but that's not totally necessary. Also the velcro strip needs more length and space to it (i like to really cinch em down), but when i told Sean that he said they'd already made that change! So it sounds like Fixcraft is spot on with this product. And at the pricepoint they're at these will fill a sorely needed hole in the market. Franklin's are ~$20 while these will sell for ~$40. Of course the Northern Standard gloves are finally out (which my boy Evan has been wearing and will review on here soon) but they feature all sorts of accoutrements and different materials that elevates their cost to around $80. So these two products, while similar, are really competing with each other.

Of course Sean still hasn't pulled the trigger on the big order yet, so email him at yo@fixcraft.net and tell him you want a pair! There's nothing like a bit of mild harassment to get the ball rolling!