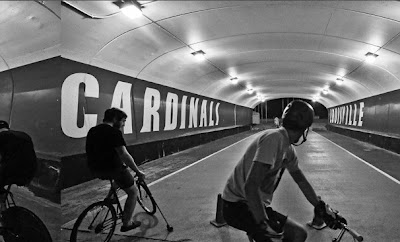 “MARCO…POLO!” SHOUTED THE BIKE-BORNE COMBATANTS ACROSS THE COURT AND ON EITHER SIDE OF ME. AND THUS THE MATCH BEGAN, AS I AWKWARDLY ACCELERATED TOWARD A RED STREET HOCKEY BALL PLACED AT THE CENTER OF THE CENTRAL AVENUE OVERPASS TUNNEL IN THE PAPA JOHN’S CARDINAL STADIUM PARKING LOT. I ATTEMPTED TO STEER CLEAR OF BOBBING AND WEAVING BIKE FRAMES WITH ONE HAND WHILE MAKING FEEBLE USE OF A HANDMADE MALLET WITH THE OTHER.

I WAS LARGELY INEFFECTIVE, AS MY FELLOW COMPETITORS TWISTED ACROSS THE COURT IN OPPOSING CIRCLES. THE BALL PASSED IN BETWEEN WHEELS AND BOUNCED OFF WALLS. SUDDENLY I WAS CHASING AFTER A BREAKAWAY WITH THE ORANGE STREET-CONE GOAL IN SIGHT, ONLY TO BE CUT-OFF AND SKID TO THE PAVEMENT AS I SQUEEZED MY BRAKES A BIT TOO FEVERISHLY.


- - - - -
Read the whole article HERE by Chris Ritter of the Louisville Paper.

I really like this article. I meant to post it a few weeks back but just got around too it. You really should read the whole thing. It starts off with the usual synopsis about the format and mechanics of polo, but then it really delves into what makes the Louisville club unique. I'll highlight my favorite three quotes-

Roberts and Flaherty assert that over the past couple of years LHBP has somewhat dialed down their reputation of having a penchant for drink.

“We were definitely the only team in a tournament heckling each other,” said Flaherty.

But they are nonetheless proud that the Louisville game’s basis of friends and fun first has endured, even while they are striving to become more competitive on the national level.

“It’s crazy how organized they are up there,” said Flaherty about Indiana’s eight or more established clubs around the state. “If there ever was an area of complete polo nerds, it’s Indiana.”

I love it! One of the best polo article i've read in a long time. And thanks for the shout out guys! For me nerd is a badge of honor.