Midwest Open 3 final goal - or not?

I was asked to referee by Nick Dellwo after being knocked out of the double elimination (taking 5th place with Capt Jake and Meg Lee) for the final run of matches. I happily obliged as I have as much experience reffing as anyone in polo and was even a part of the committee that wrote version 2.0 of the ruleset (which has not yet been officially adopted, but now that the season is over that's one of the issues the NAH board is gonna tackle). Usually the higher level the play the less a ref is needed except for the most controversial/subtle calls. Such was the case in this match. YOLO POLO (Kruse/Hill/Dellwo) and Otter Spice (Kremin/Simpson/Schultz) are easily the best players in the Midwest and their skill showed on the court. Often times players will make up for lack of skill with physicality (for which a good ref will penalize them) but that wasn't the case here. If anything it was the excess of skill that led to the controversy.

>Now to elaborate and explain why im sure he did.

(1) The goal judge. Sam Crossley (wearing a red jacket in the video) had been the goal judge for the stretch of final matches and he was doing a great job. A good goal judge will clearly signal when a goal is made or a close shot misses, but a great goal judge signals even on wide misses. Suffice to say Sam was paying very close attention the entire time and doing as good a job as a goal judge can do. I confirmed the goal with him and we even spoke afterwards and agreed on exactly what we saw. He didn't think it was legit- he knew it was. That alone should be enough, but when the stakes are this high i can see why people would want more.

(2) The sound. Did you hear the *kook* sound? That's the unmistakeable sound of a Milk head. Back in February I reviewed the first Milk heads to come stateside. Even then i immediately noticed the unique noise it made when hit off the end. Anyone who's ever played with one can tell you that. It has to do with the milling on the inside of which there's a center ridge and another ridge on the uncapped side. That up and down internal design is what creates the unique acoustical properties, also highlighted by the fact that Unibody heads make a completely different sound. Let's also contrast that sound with the *clank* noise that a shaft shot makes- it's flat, metallic sound that is equally unique. Not only did i see Ben score that goal but i heard it. Watch the video again, it's unmistakable. Hell, Mr.Do even puts that little sound at the end of the video! He knows what's up.

(3) The video. I've watch this over and over and it comes down to a couple frames... 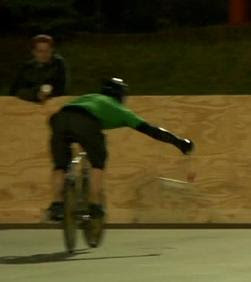 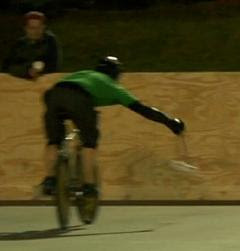 See how the ball is extremely blurry in the next frame? That's cause it's now in motion at a higher rate of speed than it was when it was falling. Still, you can see that red blur is now about three inches to the right of where it just was- and still a good six inches from the shaft. 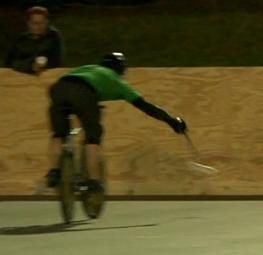 The ball is now blurred even more and slightly further to the right. The mallet follows through and downward while the ball continues towards the goal. The actual point of contact is somewhere between frame 1 and 2, and while i wish the camera would've been even faster and more accurate we're already pretty lucky that Dustin was recording this with the quality and acumen that he brings to the table.

So let's just call it what it was- an amazing fucking shot. It did seem to strike the outer edge of the mallet face but that happens all the time, even for shots on the ground. I know Nick Charlie and Dellwo probably feel like they got robbed, but that was a legit goal and on top of that they had plenty of chances to win that game, especially as they had their fourth goal a good seven minutes before Ben's final shot. Those guys know i love them and i was actually cheering for them to win (Simpson Kremin and Schultz already have plenty of trophies on their mantle) but that doesn't affect my position or change what happened.

I would argue, however, that this whole debacle should make us think long and hard about the rules we set. If some elements of our game are visually indistinguishable by a referee, then how are we to enforce them? We were lucky to have a camera there but that's not always the case. There's a discussion about this on the League of Bike Polo and some people are already bringing back up the idea that "anything that goes in should count". While i wouldn't go that far i think we need to keep the game both skillful AND enforceable. If we can't trust our goal judges or refs then why even have em? And if it is impossible to visually distinguish one thing or the other then the rules should take that into account. Is our current ruleset perfect? Hell no. Is the v2 ruleset perfect? Of course not. But we're getting closer, and we should use controversies like this should help move us forward- not to slide back to the days of traffic cones, play to five and anything goes.