What is "the polo season"? 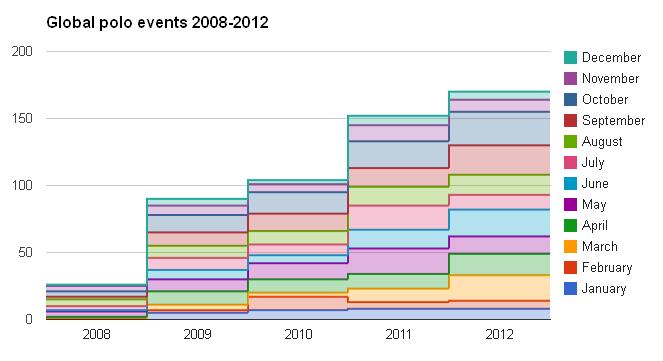 I love numbers. Opinions are always subjective and scattered, but numbers tell their own story and never lie. Earlier in the year during NAH discussions i started making a spreadsheet to map out "the polo season". Now that the year has ended i decided to finish out the chart and clean it up a bit. While a lot of the conclusions i draw will be obvious, it's nice to have visuals and numbers to confirm that which we already know.

For example- while anyone can go out and play baseball any day of the year the professional league (MLB) starts its season in April, runs through August, and holds its playoffs in September and October. Alternatively the National Hockey League, as an indoor sport runs October through March, with playoffs into April and even May. (though i'm still pissed about them canceling the Winter Classic...)  Most athletic seasons are defined by their tendency to be played indoor or outdoor, but the exact scheduling also takes into account weather, location, holidays, and competing sports.  While the NFL and the NCAA are both playing football, they intentionally schedule their title games a month apart.  Tonight i'm gonna watch Notre Dame play Alabama for the national championship, yet the Super Bowl won't take place til early February.  Obviously there's a myriad of considerations when defining an athletic calender, but i bring up these examples and pose these questions because i hope the polo community is thinking as much about our sport as others have about theirs.

For reference (and fun) take a look at Wikipedia's chart of seasons by league.

Now back to polo.  I took all the events posted on the League of Bike Polo from 2008 through 2012 and organized them by month, year, and continent.  Yes i realize that doesn't include every possible event, nor are all events created equal, but this is the best data-set available at the moment.

HERE is the google doc with the numbers.

The first takeaway is look how much polo has grown!  From 2008 to 2010 we went from only a handful of tournaments to over a hundred.  And while we experienced growth in 2011 and 2012 it was slightly muted compared to previous years- hopefully that doesn't mean polo is "leveling off".  Personally i don't think it is, at all, but that might speak to the quality of events increasing as opposed to quantity.  The difference between the first Worlds in Philly and Worlds in Geneva is like the difference between night and day.  We've grown not just bigger, but better.

But back to the season. 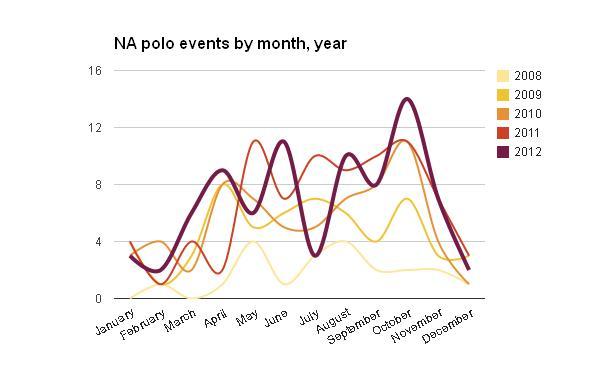 While i'd love to discuss every little bit of this my fingers would fall off trying to type it all, so let's just go start with the obvious- January, February, and December (and arguably November) are the deadest months for polo.  Snow-polo can be fun, but it can also be dangerous (and i have a metal plate in my wrist to prove it). There is clearly an early peak and a late peak, spring and autumn respectively, when the weather is ideal to play polo- not too hot, not too cold- and lulls during the summer.  What's interesting is that the lull doesn't necessarily fall at the same time each year.  in '09 it was in May, in '10 it was June/July, in '11 it was just June, then in '12 there was a massive drop during July.  I'd argue this shows that people are trying to plan their events earlier, resulting in the calender becoming progressively more "front-loaded" each year.  But then we must note that the autumn months- August, September, October- are clearly the favorite time for events to be held, with October taking the crown for most polorific month on the calender.  Personally October is my favorite month out of the year, plan and simple.  The weather here in Indiana is just perfect.  A light jacket will do you fine, the summer humidity has finally gone, and as the leaves begin to change the scenery is almost magical.  So i see why everyone loves October, but pointing this fact out doesn't mean we all need to rush to plan events for one or two months in particular, but rather we need to spread out our events to maximize both participation and enjoyment.

Which brings up a good question- just how many tournaments can a player reasonably attend in a year?  We're a weekend sport, so that's 52 possible events.  Subtract the dead-of-winter months and you're at about 40.  So considering that even the most dedicated player can't play every single weekend let's assume every other weekend- that's 20 events per year.  And not all of those will/should necessarily be high level events- you gotta leave time for the pickup tourneys, the friendlies, the new club visits, the St.Louis Lock-Ins of the world.  Hopefully you're seeing why i think it's important to keep a keen eye to the calender.  There's already more events than any one person can possibly attend, so as polo continues to grow the way we organize our season will become more and more important.

Now let's look at them yurpeens... 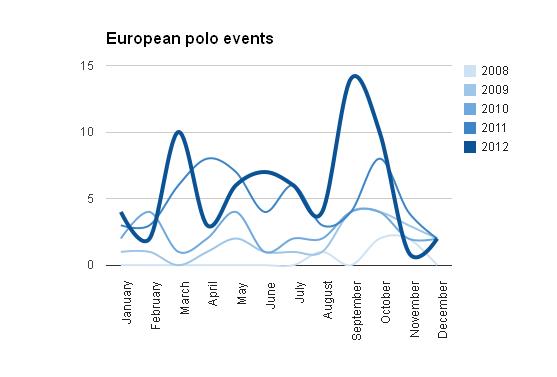 You'll notice similar peaks and valleys, though the summer lull seems a little more pronounced... until 2012.  This past year seemed to blow the previous stats out of the water... an earlier push in March, April lull, then a slight bubble in early summer, another lull in August, then triple the number of tourneys in September.  While the overall averages (chart below) still follow the general pattern of spring boom, summer lull, autumn boom, i think what this chart really affirms is that polo tends to go in spurts.  That is to say that there will be a bunch of tourneys at one time, then people will run out of money or time-off or interest and a lull will occur, then as interest/time/money rebound another boom occurs.  I think this is a reality that we all face- maybe you go to three tourneys one month, but at that point you've probably exhusted your bank account or girlfriend's patience and decide to stick closer to home for a bit.  I'd really like to have a data-set that included distance traveled.. oh man think of the graphs + maps we could make!  Thankfully Zach from Austin has his polo stat site running better than ever.. the more metrics the better in my opinion!


But i digress.  Here's the averages grouped by Northern and Southern Hemispheres... 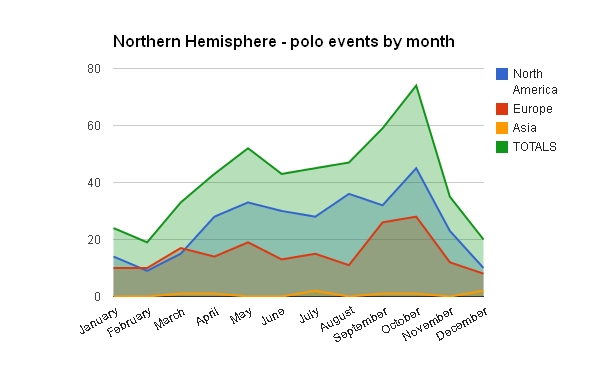 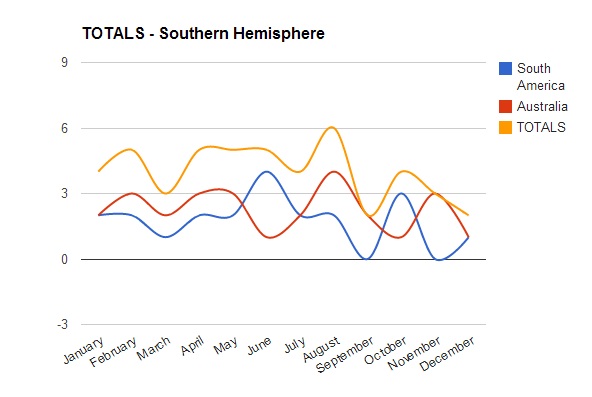 It's a little easier to see the overall flow of the season with these charts.  I thought there might be more of a difference with the Southern Hemisphere being in winter while we're in summer (and visa versa) but then i looked at Syndey's average temperature by month and saw they don't really have much of a winter anyways.. unless you consider 47 degree Fahrenheit to be "cold".  I do not.  But maybe that explains while the Australian calender is a lot more balanced and constant than their northern counterparts.  Maybe it's just the smaller number of events skewing the results.  Either way i'm not the right person to be commenting on anything south of the mason-dixon line... maybe the gents over at GoalHole could enlighten us to the ins and outs of the aussie (and kiwi) polo calender?

Anyway, i can ramble about this stuff for hours, but for now i'm just putting this google doc out there for others to play around with.  Here's the full link in case you wanna copy it...

Keep in mind there's tabs (sheets) at the bottom that have more and different info.  I have a few other graphs that i'll share later, but if there's anyone out there who wants to use this info and come up with some of their own i'd love to see em!  Just copy paste the numbers into your own google doc if you wanna make some new charts.  Maybe you don't agree with my interpretation of the numbers- that's cool and i'd love to hear what you think.  And yes, i take polo a little too seriously, but i know a lot of you do too.