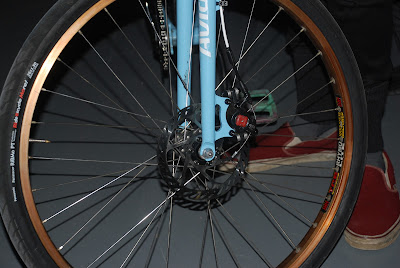 Every time i see Tucker there's something different about his bike, and this past weekend at the Lock-In was no exception. A whole new set of wheels was built up, each with something special. I've thought about putting a disc brake on the front for some time (a la every person in Cascadia) and his BB7 setup seems to do the trick. He left the v-brake on the back (single digit ultimate!) and said you definitely have to tune em right but there power is all there. I rode it around a bit and it was easily two to three times more powerful that my current setup, then again i'm using shitty shimano v-brakes at the moment. Still, after riding that bike the switch almost seems worth it.. but that's not all... 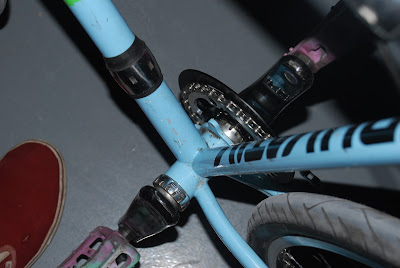 It's safe to say at this point that Tucker is the man who brought the external bottom bracket to bike polo. Sure there's might be a few others out there who had one on their bike before the rest, but no one has spent the past couple years preaching it's benefits like the fine Mr.Schwinn. There's been A LOT of new Jousts and Rustbelts popping up lately, and every single one of them has gone external with their BB. Moving the bearings to the outside allows for bigger (and therefore more durable) bearings in addition to the extra stiffness and weight savings. Plus there's a whole range of downhill cranks that pair with them perfectly. Which is another point Tucker's been trying to make for some time now- the crossover between downhill MTB and bike polo is a lot greater than most people (read: companies) have acknowledged so far. It's a good thing, and i every time i see some rad parts never meant for polo it brings a smile to my face. Much like the smile i had when i saw Tucker finally cut that giant mane he called facial hair ;)

(also note the tab on the right side for a Hammerschmidt..) 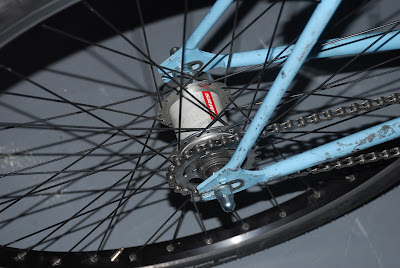 Which brings me to the last new addition, and it's probably my favorite. A automatic 2-speed SRAM hub. Polo gears have always walked a fine line between too much spin and too much torque. What works for quick moves in the crease doesn't give you a full gallop in open court. The automatic shifting is an elegant solution to that. Sure Tucker already had a Hammerschmidt on there and could shift gears with his thumb, but it's one more control to fiddle with during a match and damn that thing is expensive. The Automatix is ridiculously affordable and the difference it makes when it upshifts is worth every dollar. Keep yr rear in place and spin to keep your initial gear but when you get out of the saddle you can feel the extra boost kick in. It's pretty amazing. Now it would definitely take some extensive familiarity to make sure you don't shift at the wrong times, but it's a new level worth exploring. In polo sometimes that one extra tooth on a cog can be the different between victory and defeat, so imagine what a whole other gear could do for yr game!

So yeah, Tucker is always pushing gear to the next level. What else do you expect from such a great guy with a great history behind him? Can't wait to see what crazy idea he brings to polo next..