5am mallet census at the Lock-In 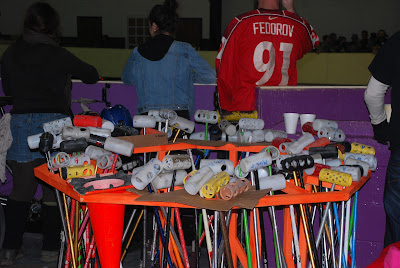 So here's what i did- around 5am at the Lock-In when i was starting to feel a little loopy and needed a distraction i decided to count up all the mallets and shafts that were waiting in the rack.  The queue wasn't at full as it was at the height of play- round 5pm the previous day- but it was a still a nice little snapshot of midwestern polo preferences.  Is this a scientific survey?  Nope.  Does this represent all of North America?  Hell no.  But in this place, at this time, these were the preferences of these people.  So take it worth a grain of salt, but i do think it pointed out a few interesting things.

Skip right to the data if you want:  5am mallet census google doc 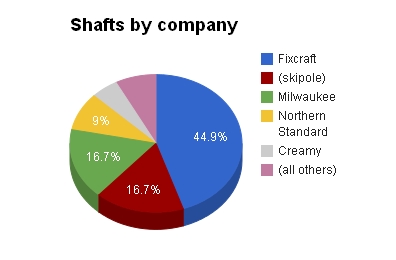 The first thing i looked at was shafts.  The more established companies (MKE, Fixcraft) clearly have the head start over the newer ones like Creamy.  And though Milwaukee made the first legit polo shaft, Fixcraft was the first to offer multiple styles of poles.  The data shows a slight preference for the LT over the XT, but the real winner is Fixcraft since by offering more options they can claim a larger share of the market.  Or maybe it's just cause St.Louis is really close to Lawrence, Kansas.  Northern Standard had a good showing but still slightly less than i expected.  I'd say a good 50% of the mallets here in Bloomington use Northern Standards, but they've been out of stock for a while (and still will be for some time) so maybe that's what's hurting their numbers.  Yes i know they have the new Brutus shaft out now, but it's 30% heavier and being ultralight was what i loved so much about their original shaft.. oh well.  And of course the good old skipoles were still the choice of many, though what's most telling about this chart is that polo specific shafts have totally eclipsed ski poles.  I remember back when the MKE shafts came out a lot of people scoffed at the cost and said they'd continue to use thrift store finds.. well maybe those people still do, but a vast majority of players nowadays clearly prefer a new product. 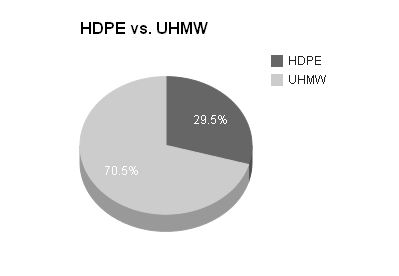 Here's another "look at how much we've changed" figure.  At the first lock-in nearly all mallets were made of HDPE.  Lucky was selling his capped mallets backed then but even they were a minority share of the mallets being used.  From 2010 to 2011 was when things really started to change.  I remember going to an event in Lexington where suddenly everyone had a "space mallet" made of oversized UHMW.  People were scooping and airmailing like crazy and McMaster-Carr was probably rolling in the dough.  But over the past couple years we've seen more and more companies producing heads, and the durability of UHMW is clearly preferred over the classic HDPE.  Sure UHMW was around back then, but it wasn't nearly as ubiquitous as the gas pipe we would all "find" laying around construction sites.  Every once in a while we'd find a legit source but with easily purchasable products from so many companies, who needs to go through the hassle?  HDPE will never disappear completely- it has a permanent place in polo as being cheap and easy to find- but i do think we'll continue to see less and less of it as the years go on. 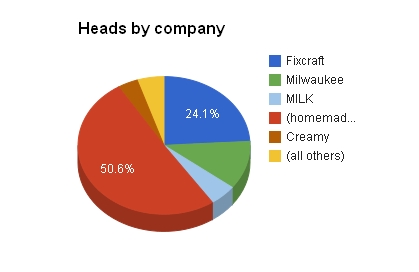 Finally we look at heads.  While ski poles only capture 17% of the market homemade heads are still going strong.  Keep in mind when you look at the data that's both HDPE heads combined with UHMW uncapped heads.  An uncapped, swiss-cheesed HDPE head is about as classic as its comes and was of course well represented, and i'd content that the uncapped, oversize, ultra density head has become a midwestern staple.  It's easy to scoop and pull balls off the wall, it's lightweight, and it's easy to put lift on the ball when you want to pop a shot up.  Fixcraft is again at the top of the market when it comes to heads, but the preference is really telling- players at the Lock-In preferred the 2500 over the 2375 by a margin of 18-1!  I own and like my 2375, but i'd admit i like the 2500 even more.  It was far and away the most popular head that Lock-In.  I'd venture to say it's because unlike MILK or MKE heads with their thin walls the 2500 is the same thickness throughout, making it much easier to drill holes in it (which almost everyone does).  It's versatile and still allows for that bit of DIY modification that most players end up going for.

I was also surprised at how well the Milwaukee heads were represented.  You'd think with all these fancy new options out that the older options might get pushed aside.. while that's true of the St.Cago heads (there was only one) the Milwaukee classic head was still the choice of many.  I've also heard that they're coming out with a newer, even better version of their head this year so i'd look at their market share to keep increasing.  Market share.  Jeez that sounds weird to say in relation to polo.  I'll bet you none of these companies are really turning a profit by offering polo products.  Maybe they are- I hope they are- but our sport is still young so the margins are probably slim.  But with polo's exponential growth i'm sure that'll change.

I'm starting to ramble, so i'll cut to the chase a point out just a couple more things.  Creamy is finally making a dent in the midwest, Eighth Inch polo products are preferred by no one, and even as i did this census i was being introduced to new products that have just hit the market (Magic green heads, Fixcraft RT shafts).  The future is bright and i look forward to seeing where this crazy sport goes next!


Edit:  Just for illustrate how far we've come in just two years (from Lock-In II to Lock-in IV) look at the mallets in this photo i took a few years ago... note all the black and orange HDPE and ski poles.. there's only 4 heads of UHMW out of nearly 80 mallets.. and only 4 MKE polo shafts.  Now go back and look at those numbers at the top. Crazy! 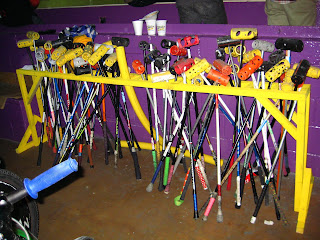 Posted by Polo-Velo-Bloomington at Friday, February 08, 2013