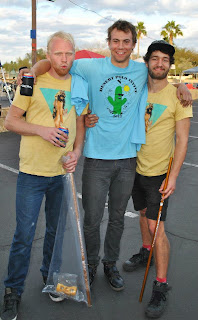 Kruse, Dillman, and Halverson win the first major of the year!  Final results here at Podium.  Note that AJ/Jason/Mike took second, proof that those kids are still getting better and better! (hell at NA's they put my team down like a sick dog at the vet)  I'm really hoping some footage of the final match pops up somewhere...

I meant to post this last week but as you can see from the lack thereof i've been pretty busy.  Now's the time to get your life in order cause the onslaught of tournaments is about to begin.  I'm still trying to collect all the new gear i'm gonna use for 2013, and it kinda sucks at the moment cause both Fixcraft and Northern Standard are out of the poles that i like.. oh well i might just have to try more new things.  I'll tell you what i won't be investing in though- any of those Eighth Inch products like the ones the boys above are holding.