"Battle for the Midwest puts Mankato bike polo on the map" 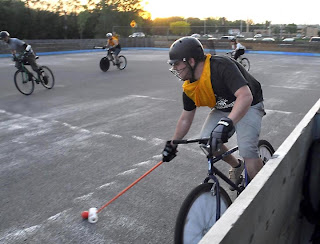 MANKATO — The hot spots for the emerging sport of bike polo are big cities like Seattle and Milwaukee, but if the members of the Blue Skunk Bike Polo Club have something to say about it, Mankato will be in the mix one day.

“I would love it to be,” club member Bruce Wahl said.

For one weekend, anyway, Mankato will be in the spotlight, as the Blue Skunks will host the Battle for the Midwest, a regional tournament involving teams from some of the country’s top clubs.

An eight-team tournament will take place at the Mankato Curling Club on Saturday and Sunday. Wahl and teammate Joe Rstom said teams are coming from Milwaukee, Chicago, Winnipeg and Minneapolis, as well as Missouri, Indiana and Michigan.

The Mankato team is definitely the underdog, they said.

“The players coming are highly skilled,” Wahl said. “They’re some of the best players in the world, real top-shelf. They are players who dedicate a big portion of their lives to polo.”

The sport is played just as one might expect, with players riding bicycles around a court while passing and shooting a small ball with specially designed mallets.

The Blue Skunks have been playing regularly on the outdoor rink on Stoltzman Road for about four years. Thursday nights are open to newcomers who want to learn the sport, while Sunday’s feature competitive matches between the veteran players.

“Growth has been pretty steady,” Rstom said, “We’ve gone from six people to over 20 showing up. Right now, there are about 12 consistent players.”

Wahl and Rstom are among a small group from Mankato that travels around the country to play in tournaments.

Last year, the Battle for the Midwest was held in Indiana. The Blue Skunk club bid to host this year’s event and have been planning the tournament for about six months, securing sponsors and building and installing boards at the curling club after the ice was out.

“The Midwest is one of the most competitive regions in the country,” Rstom said. “So it’s a bragging rights tournament. We’re all gunning for each other.”

Most tournaments feature teams of three players on outdoor rinks, but the Mankato group hopes it will be at the forefront of rising trend in the sport with its format.

Besides being indoors — no worries about the lingering winter weather! — teams will have seven players. While the action on the court remains 3 on 3, teams will be able to make line changes, just like hockey teams.

“This format is a big step toward validating the sport,” Wahl said. “If we want to grow into something larger, we’re going to have to evolve. ... This is a step in the right direction for the sport.”

The games, which are open to the public at no charge and also will be broadcast online at bikepolo.tv, will consist of two 25-minute halves until Sunday evening’s final, which will consist of three 20-minute periods.

“The difference between regular 3 vs. 3 and this is this is club-based,” Rstom said. “Teams are playing behnd the banner of a club or associated with a city. That gives you something to cheer for. People can show up and cheer for the Mankato team.”

Awesome article on the tournament this weekend! Check out the actual article here.

And don't forget to tune into bikepolo.tv and watch the broadcast!

Posted by Polo-Velo-Bloomington at Friday, April 12, 2013